Everything you need to know to become an electrician 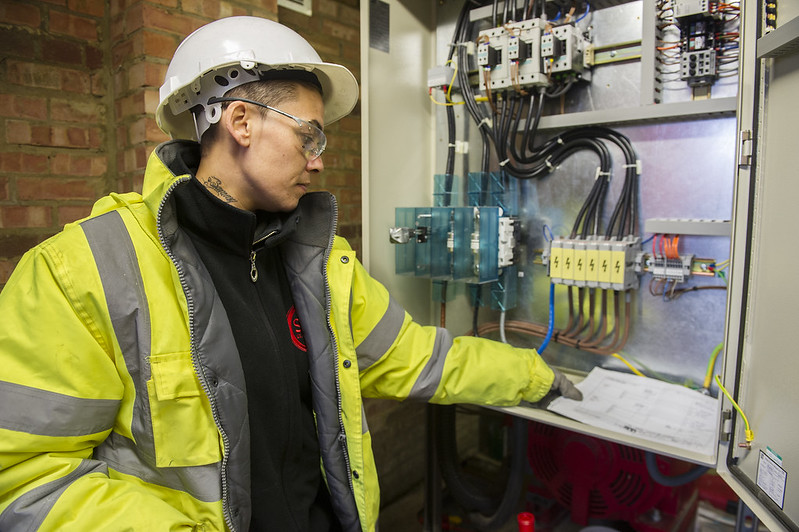 If you haven’t heard, there’s a skilled tradesperson shortage. Starting in the ’80s, high school guidance counselors pushed a college education as the Key to Success. Everything else—working with your hands—wasn’t really promoted. At the time, no one really noticed that many people were not going into the trades. There were plenty of tradespeople to fill open spots back then.

Now, though, many of those tradespeople are retiring—and there are not many young people coming in on the front end.

But the trade that is in the shortest supply? That’s got to be electricians. Skilled trades staffing agencies like Great Lakes Skilled Trades often scramble to fulfill requests for electricians. As society becomes more and more technological, by necessity it becomes more electrified. Think about it. How many of us are living in “smart” homes? Seems like everything is “smart” nowadays—and that requires electricity.

“There’s a shortage in all the trades, but for electricians, that shortage is on steroids,” said Walt Czyrnik, Vice President of Membership and Chapter Development for the Independent Electrical Contractors. “Look at the data taken directly from the U.S. Bureau of Labor Statistics. In job outlook, electricians are expected to grow 8 percent from 2019 to 2029, much faster than the average for all occupations. Not just all trades—all occupations. This is verbatim from the BLS website.”

In this post, we’ll look at what you need to do to become an electrician—and thrive at it—and talk about the prospects in terms of wages and career progression.

How much can you earn as an electrician?

In states with strict licensing requirements, licensed Journeymen and Masters can almost name their own wage. Here in Michigan, as an example, we see Michigan Licensed Journeymen getting hired at between $32 to $40/hr.

Overall, electricians tend to be the highest-paid skilled trade.

“It requires significantly more training to become an electrician than most other trades, and it is critical that the work is done correctly,” Walt said. “Electricians understand the importance of their quality of work when wiring a hospital or daycare center, as an example. The employers of these electricians recognize the amount of attention to detail needed for this type of work, which results in paying higher wages than for other construction trades. Becoming an electrician is not just a job; it is a career you can have to support yourself and your family for the rest of your life.”

What does an electrician do?

Day to day, that means you’ll do things like the following:

“An electrician’s job is certainly challenging, and working safely with electrical circuits is always on the forefront, but that makes it an important career as well,” said Walt. “No matter how much technology changes, you’ll always have to plug it in.”

What kind of training is required to be an electrician?

Electrician is one of the hardest trades to master, which isn’t surprising when you consider how technical—and dangerous—the work can be. Most electrical apprenticeship programs, like the one that IEC offers, require four years to complete, many expecting a full week’s worth of work as well as attending an in-class instruction during the evening.

“The great aspect of being an electrical apprentice is that you earn while you learn,” said Walt. “With traditional forms of education,” he continued, “the person receives the education then looks and hopes for a job. An apprenticeship program is 180 degrees different. You get the job first and then receive the training and education while you’re working at that job.”

Typically at the end of apprenticeship training, these soon-to-be electricians may need to pass a location-specific examination that tests their knowledge of electrical theory and the National Electrical Code.

“There’s a lot of knowledge to absorb and become an expert,” said Walt. “Let’s say you’re building a Walmart. Just think of all the different types of electrical systems within that building—freezers to display lighting to automatic doors. The breadth of information you must work with is off the charts.”

Is being an electrician dangerous?

After all, you could work with high-voltage electricity that might shock, harm, or even be fatal. But did you know that out of more than 735,000 electricians working in the U.S., there are only a few fatalities? And those are more likely to be the result of a fall than from electricity. According to the Bureau of Labor Statistics, in 2017 there were 8.4 deaths per 100,000 electricians. Compare that with a groundskeeper (15.9 per 100K) or farmer (24 per 100K) or even your local garbage collector (34.9 per 100K), and the dangers of a career as an electrician do not seem quite as scary.

Becky Mason, an electrician in Midland, Michigan, pooh-poohs talk of her profession being a dangerous one.

“Most people are afraid when it comes to electrical, but the truth is, you shouldn’t be afraid. Respect it, and you will be fine,” she said. “As long as you have the respect and not the fear, electrical is simple like any other of the trades.”

Do you have what it takes to be an electrician?

You’ll need basic math skills. Apprenticeship programs may offer refreshers on basic algebra to get students up to snuff. With that foundation, you’ll have to have top-notch soft skills—primarily teachability. You have to be a can-do person, someone who, when you finish one task, asks, “What do you need me to do next?” Someone who arrives at the worksite at 6:50 a.m. so you can get all your tools ready so you can start working at 7 a.m. A person who immediately raises your hand when the boss asks who wants to work overtime.

To lead the profession, you need a commitment to lifelong learning. The pace of technological change is dizzying. The best electricians have a passion for the industry and make a point of staying up on what’s new. Power Over Ethernet. LED Lighting. It’s always changing.

That’s the kind of person who is going to catch an electrical contractor’s eye to potentially get hired.

“A career as an electrician can really take you places—if you have the right stuff,” Walt said. “Prior to COVID, I was at the apprenticeship training center in Memphis and talking to the apprentices as they were ready to take their final school year exam. This one first-year apprentice showed up driving a company service van. ‘How did you get a company vehicle and you’re only in the first year of the program?’ I asked him. ‘Mr. Walt,’ he said, ‘I’m just that good!’ he said with a smile. I said, ‘I know what you actually technically know. It’s more than what you know. It’s your potential your employer sees. You have the right attitude. You could become a project manager or an estimator. Maybe you’ll even own your own company someday.’”

Walt closed the discussion by saying that “being an electrician is one career that cannot be outsourced. You can’t send a Walmart overseas to be built and then send it back.”

Everything you need to know to become a welder

Everything you need to know to become a plumber