Everything you need to know to become a roofer 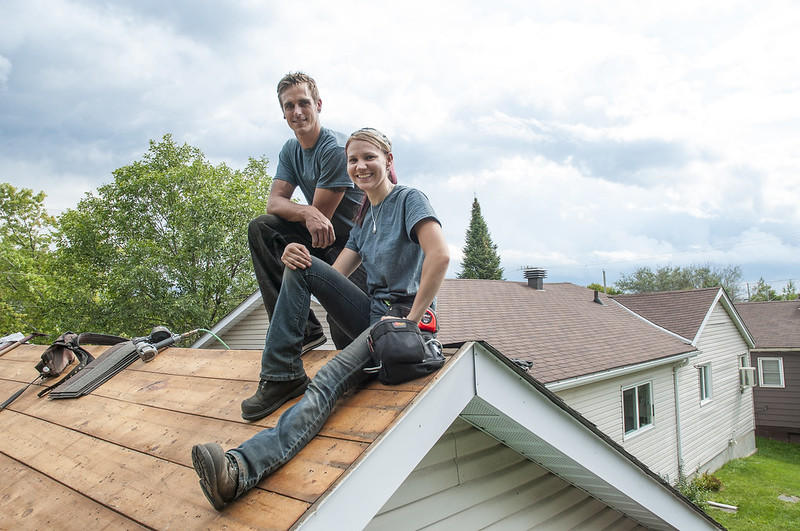 Why not become a roofer?

“I love roofing!” says John, field superintendent with Great Lakes Systems, which has been serving the greater Grand Rapids area for four decades. He supervises five roofing crews every day, always making sure to pitch in, even at 53 years of age, screwing down membrane or whatever needs doing. “When I started, I was young, fresh from two combat tours with the 82nd Airborne Division. To me, it was the perfect job. I could not be inside in a factory. I tried, I really did, right after the service. Two weeks. That’s all I could take. You can’t see the sky. In a factory, you’re pretty much 8 to 4 or whatever, running the same part day in and day out. No thanks. I’m not a robot. The thing about roofs is every roof has its own problem. Every day’s a new challenge.”

In this post, we’ll look at how you can become a roofer—what training is required and what you can expect to earn. We’ll also provide a few tips on how to stand out as a roofer.

What do roofers do? 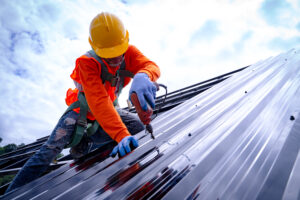 Roofers work on new installations as well as renovations and roof repair projects in both residential and commercial settings. As expected from the job title, roofers usually need to climb onto rooftops to work. So this might not be the job for you if you have a thing about heights!

You will be working on roofs made from many different materials, including asphalt, metal, and rubber, and, on “green roofs,” plant matter—in any weather. Some roofs may be flat, and others will be pitched.

Whatever the roof is made of, the process is pretty similar. Screw down the insulation. Then lay the membrane and bond or screw it in. From there, you put on whatever roofing material you’re working with—emphasizing speed and excellence.

Roofers monitor the entire process of roofing in residential as well as commercial construction. They analyze the construction plans and make sure that the roofing is done in strict accordance with the design. Roofers also determine the materials, substrates, and supportive accessories to be used for roof installations. Even the specifications of the beams, trusses, and rafters upon which roofs are installed are decided by roofers.

What do roofers earn? 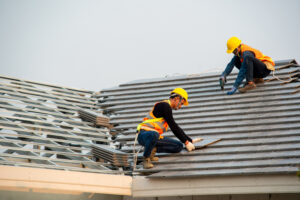 According to the Bureau of Labor Statistics, roofers make an average $22.03 per hour, or $45,820 per year. During winter, the workweeks might be only 28 to 35 hours long, but in the summertime, roofers can pretty much put in as much overtime as they want. The faster the job gets done, the more money the roofing company makes—so the top end is a lot higher than $45,820.

And a smart roofer is always looking to take the next step up.

“After being a roofer, you want to be a mechanic. That’s just the phrase we use, mechanic. It’s a person who’s an all-around guy, can do everything needed on the roof, even welding. There’s nothing he can’t do, and if the foreman is sick or on vacation, they can take over as foreman. From there, you go to foreman and, eventually, super. I tell my guys, ‘Learn the job in front of you. You might be laying down board and screwing it in for months at a time, and then all of a sudden, someone gives you a chance to do some detail work. Man, you’re all over it.’”

What kind of training is required to become a roofer? 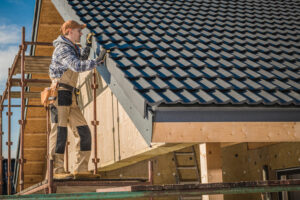 There are no educational requirements for roofers, and most training is done on the job. Apprenticeships are available from unions, contractor associations, and similar.

That’s pretty much how it worked for John. When he was in high school, he did grunt work for his uncle, who owned a small roofing company—tearing off the old roofing and throwing it in a dumpster. He would work at night so that the structure was ready for the roofers in the morning.

“It was slave labor basically,” he laughs. “I didn’t mind. Right away, I kind of liked the work.”

When he got out of the service in 1992, and after he had learned factory work wasn’t for him, as noted above, he jumped at the chance when a buddy with a roofing company told him they needed some people.

Now, thousands of roofs later, he wouldn’t change a thing.

“To be honest, I didn’t have any career goals at first. I just knew I had a daughter to take care of and I needed to put food on the table. I didn’t know how long I’d be doing this.”

“Once you get good at something and your roofs start winning awards, then you’ll start moving up the ladder.”

Throughout his roofing career, John’s taken advantage of the training his employer has provided in their shop. “I’m always game for learning something new,” he says. “Also, I figured it was a great way to send a message to the company that I was one of their top employees.”

The Bureau of Labor Statistics lists roofer as the fourth most dangerous profession in America, behind loggers, fishermen, and pilots. The safety hazards are falling from the roof and burns and electrocution from overhead power lines. Many staffing firms, like Great Lakes Skilled Trades, will send out workers on flat roofs only.

John says Great Lakes Systems mitigates the danger by having a nonnegotiable commitment to safety. You’re not just improvising up there. Everything by the numbers.

“We have warning lines on every roof. That’s the first step: Put up the warning lines 12 feet in. None of the new roofers are allowed outside that line at any time—period. The more experienced roofers, they can go outside the lines if they’re tied off or have a spotter.”

What separates the great roofers from the good roofers? 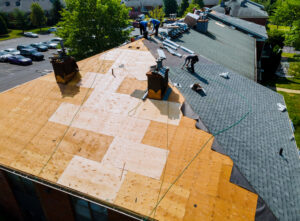 “Motivation,” John says. “Someone who wants to do better than the next guy. Great Lakes Systems isn’t my company, but if you’re on one of my crews, I treat it that way. I want the customer to know that they are the most important person in the universe right at that moment. Their satisfaction is all-important.”

John insists every job gets done his way—just like they were trained.

“Roofing used to be a young person’s job—but not the way people are now. Back in the beginning, we’d hire kids, and they’d go like the dickens,” he says. “Nowadays, young people don’t seem interested. I admit it, it’s a hard job—out in the elements, toting heavy rolls of insulation and membrane—but once it gets in your blood, you’ll never want to leave.”