Everything you need to know to become a drywaller 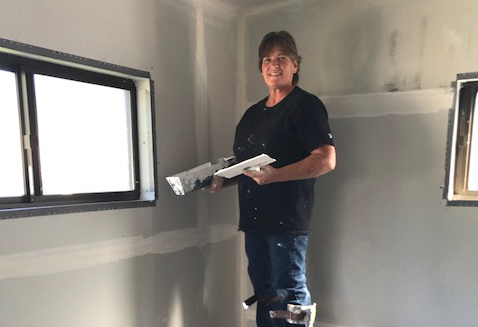 Want to become a drywaller? You’re in luck. Everybody’s looking for drywallers.

Most drywallers left the business in the Great Recession of 2008. There just wasn’t any construction. So, they retired or got into something new. Nowadays, contractors kill to find good drywallers.

That could be you. But it will take some work.

In this post, we will look at what a drywaller does, what training is required and how much you can expect to earn as a drywaller. When you get done with the post, you should have a good idea if drywalling is for you.

Our guide on this journey will be Traci Hill, whose business goes by the name of The Drywall Lady. She’s based in Bellville, Mich., and she’s a master at her craft—possessed of a skill that comes from doing it again and again. And again.

“The great drywallers want it perfect,” Traci said. “They’re not going to settle for subpar. I’m training my son in drywalling, and he’ll think he’s finished a section of wall and I’ll say, ‘You’re not done.’ And he’ll say, ‘Don’t worry about it, the sander will get it.’ And I said, ‘No, because if the sander doesn’t get it and the painter doesn’t take care of it then the paint’s going magnify the imperfection and the customer’s not going to be happy and you’re going to have to go back out and fix it—and that’s time you should be out doing new work.”

Traci’s was a circuitous route into being master drywaller. She left the Air Force in Guam in the 80s and she decided to stay in Guam. After her money ran out, she decided to try painting.

“After a while the foreman came up to me and said, ‘You’d make a great drywaller. You have patience and I you have an eye for perfection.’ So, I said, ‘Why not?’”

When she got back to the states, she had the good fortune to get under the tutelage of a mentor drywaller with 50 years of experience.

“It was the perfect set-up for a drywaller,” Traci said. “Drywalling takes time. You can learn how to do it from a trade school, but you don’t really know how to do it until to you done it again, and again and again.

We’re talking four or five years before you get the basics down. Then you start leaning to master it. The thing that’s hardest to learn is how much mud to put on the wall and how much to take off. And then learning how to feather all that mud. If all you see is paint on the finished wall then you know you’ve mastered it. You can’t learn it from a book. You can’t learn it from a video on YouTube.”

It used to be that interior walls in residential and commercial structures were made from plaster. It was a messy, goopy process—and not everyone could do it right.

Near the turn of the 20th century, Augustine Sacket invented Sackett Board, the forerunner to modern-day drywall. It became known as drywall because of how dry the process was compared to plaster. No wet materials were needed for installation. What took weeks or months with plaster can now be accomplished in days with drywall.

Modern-day drywall is made from lightweight but sturdy gypsum that is ground up into powder and pressed between two pieces of thick paper that form a sheet or “board.”

If your house was built in the last 50 years or so, there’s a very good chance that all of the walls and ceilings are covered with drywall.

If you’re a drywaller, you can work in residential new home, new construction or remodel. Traci chose remodel because the work kept coming her way as word of mouth spread about the quality of her work.

“New homes are quick. They bring in large crews and get the job done in the fastest amount of time,” she said. “In commercial, it goes quicker because there aren’t any ceilings.

“But when you’re in remodel, things slow down. It’s very tedious. I never rush a drywaller I’m subcontracting in a remodel. I just want it perfect. The homeowners understand that, so it all works out. You don’t have a lot of board in remodel, but a whole lot of repairs. ‘There’s a hole in the wall. Fix it.’ You’ve got to be really fast, not necessarily good, to be in new homes. The builder needs the home done right away. They’ll say, ‘You have six days to finish this house.’ Then they’ll say, ‘No, you only have four days.’ I can’t do a house in four days. That’s when I left new home construction and started my own remodel drywalling company.”

What training is necessary to become a drywaller?

You start with the minimum requirement: a high school degree. Then, broadly, you have three options: a union apprenticeship, a trade school or a personal mentor.

“I tried a union apprenticeship for three months and it wasn’t for me. They put me in a Sears to start. The foreman took me to a room and said, ‘Tape this room.’ Ninety minutes later, I was done. He said, ‘You’ve got eight hours! We get paid by the hour. You get paid by the hour! Go take a nap. Go shopping. Just be back at five to clock out!’”

The thing about drywalling, is you can only learn through experience. A trade school can teach you the mechanics of it, but you’re always going to run into the unexpected.

“For example, you may have water damage and you bust the drywall and found out the two by fours have rotted so you have to learn some carpentry,” Traci said.

As far as licenses and certifications go, it depends on the state. In Michigan where Traci works, they don’t require a license. Just insurance.

How much can you earn as a drywaller?

The average hourly wage for a drywall installer in the United States is $24, but the range typically falls between $20 and $30.

“I don’t pay my subcontractors by the hour but if you did the math, I probably end up paying them $30 an hour. But if you have a drywalling company and you charge by square footage and you’re fast—and good—you can pound out two or three houses a week. There’s no reason you can’t be making six figures.”

The key to earning more money is speed—but quality can’t drop as your pace quickens.

“I make more than the typical engineer, but I’ve been doing this for 34 years. If you take the four to five years it takes to master drywalling and you learn how to get fast, you can make as much money as you want. You bid a job for $500 and you get it done in one hour, you’ve just made $500 an hour,” Traci said. “My son tells me, ‘I can’t see going to college.’ He’s been at this five years, and he’s earning $50 an hour.”

What qualities make for a good drywaller

Are you cut out to be a drywaller? Well, ask yourself, “How patient am I?” You have to be patient because it takes such a long time to learn how to do it right.

“It’s very frustrating,” Traci said. “It drives you crazy. You have to do it over and over—a gazillion times. Then suddenly, you get it. You say, ‘Yesterday, I didn’t know how to run a corner bead—but now I do!’”

You’ve got to be dedicated to this craft, Traci says.

“It’s going to take you a minimum of four years to be really good at it,” she said. “If you’re still making the same mistakes after five years, well, it’s probably a sign you aren’t cut out to be a drywall finisher.

What separates the great drywallers from the good drywallers?

The best drywallers are perfectionists. It calls for precision.